SENATE INQUIRY INTO 'CONVOY OF DEATH'

The Senate Foreign Relations Committee, chaired by Senator John F. Kerry (Democrats) is to investigate the 'Convoy of Death' and subsequent mass graves site at Dasht-e-Leili, near Mazar-e-Sharif in northern Afghanistan. 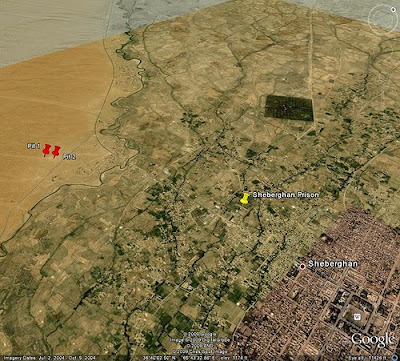 Dasht-e-Leili (red pins), Sheberghan Prison, Sheberghan town
(Google Earth image, courtesy of Physicians for Human Rights)
The Senate inquiry comes in the wake of President Obama receiving a report about the convoy and the Dasht-e-Leili graves site, from his National Security team. In July 2009, President Obama was so concerned about war crimes allegations involving US military and local Afghan soldiers, that he instructed his national Security team to "collect the facts" and present them to him in a report. There was a positive response to this from human rights organisations, including a Physicians for Human Rights response on YouTube. However, it now seems that the hoped-for Presidential investigation into the convoy and mass graves may not take place, and the report itself will not be made public.

Physicians for Human Rights will support the Senate inquiry by submitting documentation relating to the PHR forensic team's part-excavation of the grave site in 2002. PHR personnel who took part in the site excavation will also make themselves available to Senate investigators. Jamie Doran, the producer-director of the 2002 television documentary, "Afghan Massacre: The Convoy of Death" (YouTube short version), will also make available his film (official site) and other archive materials, and personal knowledge of the incident. Ditto yours truly.

More on this as the Senate inquiry gets under way.
Posted by Andy McEntee at 12:42